An interview with  Mark Meyer Appel, the founder of  The Voice of Justice 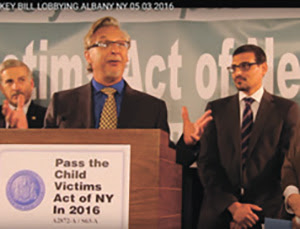 WEDNESDAY, 18 MAY 2016 07:16 ARIELLA HAVIV
There is no doubt to anyone who has eyes to see and ears that hear that the myriad headlines that dominate the media reveal egregious corruption amongst trusted officials and the kind of moral turpitude that causes a collective cringe.
For decades, the seemingly at peace Orthodox Jewish world has had its share of shocking publicity when facts emerged about horrific child sexual abuse; perpetrated not by circumspect types in the outside world but by respected adult members of the community.
Raising one’s voice in outrage and indignation and thusly confronting the dense wall of silence that has been erected by the Orthodox Community in shielding perpetrators has been a most daunting venture. Given the community’s resistance to speaking openly about this terrifying phenomenon, those who would entertain the notion of crossing this invisible line are readily shunned; threatened and even ostracized.
Enter Mark Meyer Appel, founder of the Voice of Justice. Mr. Appel’s name has come to personify those victims of abuse whose voices have been drowned out in this continuing and painful conversation. Mr. Appel , however, cannot claim neophyte status in terms of acquiring knowledge on child sexual abuse.
Having started the organization “Voice of Justice” many years ago, New York City resident Mr. Appel has been an advocate for youth and children’s services and served on the mayor’s task force on mental health. Under the administrations of both Mayors Giuliani and Bloomberg, Mr. Appel also served on the board of directors of the New York City Health and Hospitals Corporation as a mayoral appointee
Moreover, Mr. Appel’s dedication also stretched to those children with special needs who had been previously ignored or neglected by the system that was created to serve them. In 1990, Mr. Appel worked with both city and state agencies to establish an early intervention program for special needs kids, kids at risk and learning disabled kids.
Mr. Appel also played a major role in finding jobs for marginalized kids, providing them with an appropriate education and offering them a substantial amount of financial support.
“When I worked with youth at risk during programs at my home, I discovered that many of them had been horribly abused, “ Mr. Appel ruefully recalled.
“The abuse had a major impact on their lives. It really hurt these kids and the family structure. When kids are abused they have tremendous difficulty trusting anyone anymore. Tragically, the leadership of the Orthodox world has not been in the forefront of helping them and that sense of abandonment triggers anger within these victims,” explained Mr. Appel
Having witnessed the emotional scars and trauma of child sexual abuse among those he worked with, Mr. Appel was driven from a source within himself to help expose this otherwise surreptitious phenomenon.