NESHAMA CARLEBACH IN A CONCERT OF UNITY IN SOUTH FLORIDA TUESDAY JAN 31,2012 AT 8:PM 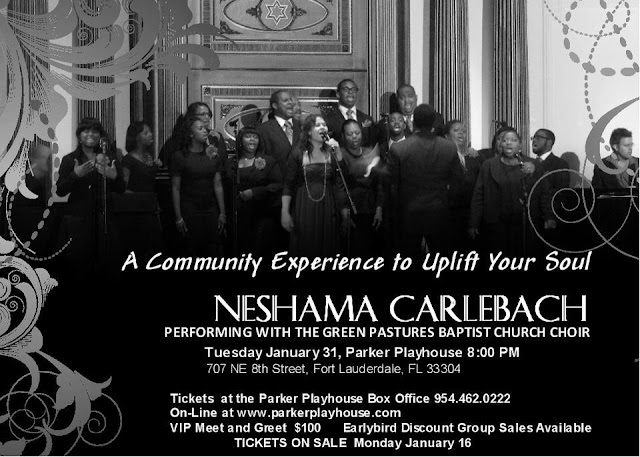 THE CONCERT OF THE YEAR 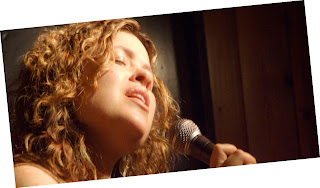 Neshama Carlebach began training as a singer and actress at the age of 5 and began singing with her father, Shlomo Carlebach, at 15. She began her professional career soon after her father's death in 1994.
Her full name is said to be "Esther Neshama Tehora Shlucha" (a pure soul that descended to this world on the Sabbath Eve).
Carlebach performs in a number of venues, including Jewish Community Centers, synagogues, Hillels, clubs, and summer camps worldwide. She also performs alongside The Green Pastures Baptist Church Choir singing Reb Shlomo's Hebrew and English collaborations.

When Neshama sings, you want to close your eyes and take it all in. Your body energizes with spirituality and goodness. Her volunteer work in New Orleans and compositions with the Baptist Choir are typical examples of how she leads by example in wanting to be better in this world and bridge gaps with others. Her messages are filled with love and hope and her voice is angelic. If you haven't heard it, you're missing out.

Deranged Sect of Jews in Israel Compare Other Jews to Nazis 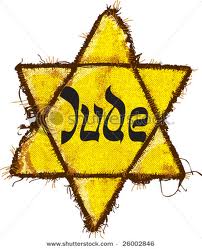 After images of kids wearing yellow patches and striped pajamas during haredi protest in Jerusalem [last night] shocked many across the country, some participants wished to explain the move.

Moshe, a member of the Eda Haredit sect and resident of Jerusalem's ultra-Orthodox Mea Shaarim neighborhood told Ynet he does not regret participating in the "Holocaust display."


The Eda Haredit member attempted to explain the rationale behind the display of Holocaust symbols, saying it was important that secular people understand the campaign that is being conducted against their community.

"It's important to remember that the Holocaust didn’t start with the gas chambers, but was preceded with an unruly incitement campaign against the Jews. Even after Kristallnacht there were those who preferred to turn a blind eye.

"What is happening today resembles those years and it can definitely reach a secular intifada," he noted.

Moshe compared the Israeli society's treatment of the haredim to "persecution similar to the Nuerenberg Laws." According to him, the very fact that a haredi man who verbally assaulted a female soldier is being accused of sexual harassment – even though many legal experts claimed there were no grounds for arrest – resembles racist legislation.

"It's exactly like those race laws that only applied to certain people," he said, claiming that if the same thing would have happened to an Arab, "The whole media would have been up in arms. But now no one says a thing."

Referring to the harsh criticism voiced over the use of Holocaust symbols, Moshe said: "No one can teach me what it is to respect the memory of the deceased. My family members were also murdered in the Holocaust.

"In Zionist Israel there are hundreds of thousands of Jews that live like complete gentiles, just like in Germany. If the Gestapo leadership would have witnessed how Jews get intoxicated on the very day that European Jews were too scared to leave their houses from fear of pogroms, they would have celebrates. This is Hitler's biggest victory. And they are the ones preaching about disrespecting the Holocaust?"

Moshe noted that the replicated image of the little boy from Warsaw Ghetto – which stirred media frenzy – was not planned, but was rather a "spontaneous initiative." However, he refused to condemn it, saying: "When the seculars explain to us why they act like Germans – we'll talk."


AND HERE IN THE UNITED STATES OF AMERICA RABBI SHAFRIN USED THE SAME NAZI PROPAGANDA TO ATTACK FELLOW JEWS
... 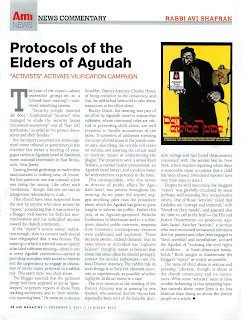 IN A RECENT EDITORIAL POSTED IN AMI MAGAZINE RABBI AVI SHAFRIN POSTED A PHOTO OF A NAZI CARTOON USED BY THE HITLER PROPAGANDA MACHINE TO MAKE A MOCKERY OF THE JEWISH PEOPLE . SHAFRIN USED THIS AS A TOOL TO MAKE A MOCKERY OF THE ADVOCATES AND BLOGGERS WHO ARE WORKING DILIGENTLY TO PROTECT OUR CHILDREN FROM SEXUAL ABUSE.IN A PREVIOUS ISSUE OF AMI MAGAZINE SHAFRIN USED A VICTIM OF ABUSE PINNY TAUB AS A PAWN TO USE NAZI MATERIAL AS WELL

SHAME ON YOU
RABBI ABRAHAM SHAFRIN who serves as the Director of Public Affairs for Agudath Israel of America and  is Editor-at-Large of Ami (Magazine). Agudath Israel was established to meet the needs and viewpoint of many Haredi Jews, while Ami, launched on November 24, 2010, promises to serve a broader Orthodox and non-Orthodox readership. He is also a contributing writer to Cross-Currents, an online journal of Orthodox Jewish thought and opinion.
Posted by voiceofjustice613 at 2:35 AM No comments: