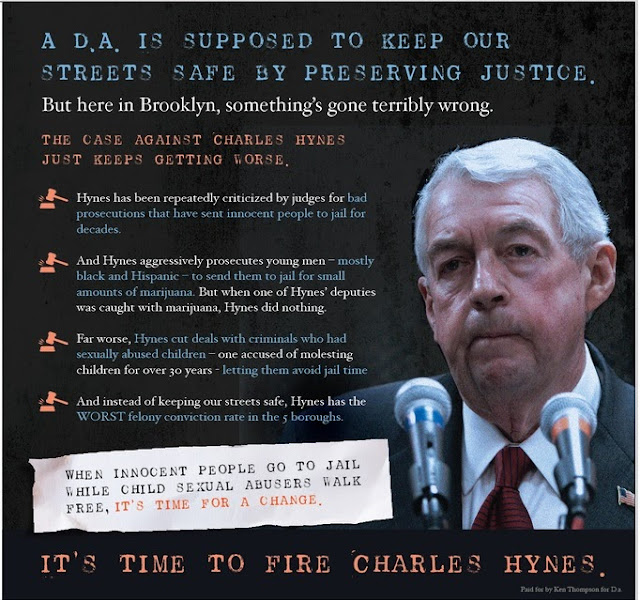 Allegations of racism, sex abuse, and dead chickens. The race for Kings County District Attorney, in which former federal prosecutor Ken Thompson is looking to dethrone 23-year incumbent Charles Hynes, has been marked by the kind of fiery rhetoric and vicious mud-slinging that the mayoral race has lacked.

A string of wrongful convictions, sex abuse cover-ups, as well as a general lack of decorum have made the 78-year-old Charles Hynes, a product of the Brooklyn Democratic machine, vulnerable for the first time since the Giuliani administration. In order to win the Democratic primary on September 10th (there is no Republican challenger) both candidates have worked to win over the single most important and nearly unanimous voting bloc in the borough: The Satmar Jews of Williamsburg.
Advertisements portraying DA Hynes as a chicken to be sacrificed during the Yom Kippur period of atonement have run alongside ads depicting Thompson as snake, coiled to strike the Orthodox community.Both campaigns deny having anything to do with the ads.
For years, Hynes has worked to protect the identities of sex abusers in the cloistered community, a privilege afforded to no other group in the city. In response to Hynes's prejudices, Thompson has launched a campaign promising “fair treatment for all.”
But will that cost him the votes from a bloc that may soon make Brooklyn look more like Rockland County?
"When a Jew is arrested, to whom do you go [for help]?” implores one poster, with a picture of Hynes standing next to the Munkatcher Rebbe, who works to keep Jews out of jail. “To Jewish leaders who act on behalf of the Jewish community,” it continues. Next to Hynes it is written, “He helped us, he helps us, and he will help us some more.”
Critics of the 78-year-old Hynes, who starred in his own reality show this summer, say he's cultivated the support of the Orthodox Haredi community by half-heartedly prosecuting sex abusers from the community. Since the media has brought Hynes’s neglect to light, he has worked to portray himself as tough on sex abusers. But as the election has drawn closer, he’s been eager to play the role of the candidate that will protect the Haredi community.
New York City Councilman David Greenfield, a surrogate for Hynes, has said that Thompson will “target the Jewish community.”
Hynes has not distanced himself from these comments. He also declined to be interviewed for this story.
Thompson, however, keeps pushing his promise to treat all Brooklyn residents fairly.
“The most important thing I’m going to do as District Attorney, is have one standard of justice for everyone in Brooklyn,” Thompson told us. “Joe Hynes has spoken words that are words that divide. Disgraceful words to speak about an entire community.”
Throughout the campaign Hynes has often put his foot in his mouth, first comparing the Orhtodox community to the mafia, and then also telling an Orthodox newspaper that “the black community, by and large, is mine.” Ken Thompson kicking off his campaign.
Thompson, who is black, wants voters to see these slip-ups as indicative of an older, out-of-touch District Attorney whose department is in a state of disarray. Earlier this year, it came to light that the testimony of an NYPD detective couldhave falsely imprisoned hundreds of people under Hynes's watch.

"What I’m determined to do is to carry out the fundamental role of a DA and that is to do justice," Thompson said. "It is not justice when someone is in jail for a murder they did not commit. Charles Hynes is now investigating 50 homicide cases by the NYPD Detective Scarcella. That is extraordinary—I’ve never heard of that being done by any DA in the city.
“What he is essentially saying is that there are innocent men and women who may still be in prison. How did we get to that point? Detective Scarcella worked hand-in-hand with the Brooklyn DA office. Hynes now has an inherent conflict of interest to not truly investigate those cases.”
Thompson, who grew up in Brooklyn as the son of one of the first female NYPD officers to walk a beat, rose to prominence as an Assistant U.S. Attorney working on the Abner Louima case, prosecuting NYPD officer Justin Volpe. After leaving the U.S. Attorney’s office, Thompson went into private practice, most famously representing Nafissatou Diallo, the housekeeper who claimed IMF-head Dominique Strauss-Kahn sexually assaulted her.

While the race has remained tight all summer, it got even closer when a third candidate, Manhattan ADA Abe George, dropped out. He said it was to ensure that Thompson had a real chance to beat Hynes and not just split the vote progressive vote.
“For me, running was all about making Brooklyn better. I pulled out to beat Hynes. There’s a terrible pattern of wrongful convictions. Jabar Collins. William Lopez. Derrick Hamilton,” George told us. “Hynes is not treating neighborhoods exactly the same in Brooklyn. In the Orthodox community, certain defendants, pedophiles, weren’t being treated the same as they were in other parts of Brooklyn. Also, Hynes has been silent on stop and frisk until the very last minute.”
Thompson believes that stop and frisk has a place in law enforcement, but that it has been abused by the NYPD. “I believe that if stop and frisk is done the right way it can help save lives. I have a young family, I have a 9-year-old daughter and six-year-old son, and we live in Clinton Hill. Sometimes we hear gun shots, and stop and frisk helps get guns off the street,” Thompson said, echoing the dubious claims of the mayor and the police commissioner.
“But at the same time we can’t continue to stop tens of thousands of innocent black and Latino young men who are walking down the street minding their own business," Thompson said. "Hynes has said stop and frisk isn’t his concern. I disagree. The Brooklyn DA has a role to play in stop and frisk. My son will be sixteen before I know it, and I shouldn’t have to worry about him being stopped and frisked just going to the store. I want stops based on reasonable suspicion, not race.”
The race, however, will most likely be decided by the ultra-Orthodox voting blocs. Hynes has continued to give the impression that he is protecting ultra-Orthodox sex abusers, most recently prosecuting a Hasidic whistleblower who was ostracized after he pushed for justice on behalf of his son and other alleged victims of sexual abuse within the ultra-Orthodox community. Yesterday, Hynes won the votes of the powerful Ahrony sect, who will now vote en masse for Hynes, a payoff for his long-time protection of the Haredi community.
“In their minds, no Haredi belongs in prison, even if guilty, except for an out of control murderer, perhaps,” Shmarya Rosenberg, an influential blogger who covers the Haredi community, told us.
While Hynes has prosecuted a handful of sexual abusers in the community, that hasn’t been enough to turn the community against him.
According to Rosenberg, Thompson supporters are “Primarily a small number of Haredim who are fed up with the corruption of their leaders and other Haredim who are upset that Nechemya Weberman and Rabbi Baruch Lebovits were prosecuted for child sex abuse.”
Rosenberg adds that many Haredi “will probably vote for Hynes if their rabbis and rebbes signal that they should do so. And many hasidic rebbes and haredi rabbis are, in fact, working to turn out their bloc votes for Hynes. They fear what would happen to their special deals with the D.A. if Thompson is elected.”
Contact the author of this article or email tips@gothamist.com with further questions, comments or tips.


all our cities
one convenient app