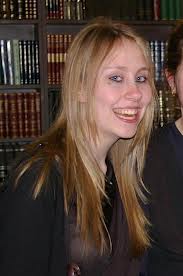 JEWISH WEEK
Police in Brooklyn and Englewood, N.J., are conducting a search for Caroline Starkman, an 18-year-old Englewood resident who has been missing since spending Shabbat in Brooklyn, over the July 4 weekend.
Her family has offered a $500 reward for information leading to her safe return, and her synagogue, Congregation Ahavath Torah in Englewood, has offered an additional $10,000 reward.
Starkman, a student at Touro College, is 5’5” – 5’6”, 110 – 115 lbs. according to missing flyers posted by the family. Last seen on July 11 on West 24th Street in Brooklyn’s Coney Island section, she was “wearing a pink bikini” and had a “bad sunburn,” the flyers stated. She has long blond hair, blue eyes, a 4-inch scar above her right big toe, and a beauty mark above her right eye.
Her parents, Cherie and Steven Starkman, immediately filed a missing person’s report, hired a private detective and reached out to “resources in the Brooklyn community” after their daughter’s disappearance, and last week “made the decision to issue a public appeal for assistance … as circumstances have developed,” according to a community announcement notice sent out by Rabbi Shmuel Goldin of Ahavath Torah, who has been assisting the family. “Nothing has materialized … no concrete leads” to aid the search, Rabbi Goldin says.

Posted by voiceofjustice613 at 1:33 PM No comments:

U.S. District Court Judge Frederic Block wrote - in what could be considered as a legal victory for the victims of abuse - he would green-light the case because officials may have lied about knowledge of the alleged actions.

VITO LOPEZ LEADER OF THE BROOKLYN DEMOCRATIC PARTY MUST RESIGN 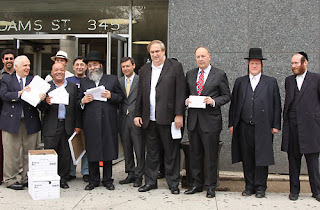 NY State Assemblyman Vito Lopez, Brooklyn's Democratic Party boss and power broker, has lost his committee chairmanship, enjoined from employing people under 21-years-old or from having interns, and has been censured after the Assembly's Ethics Committee found  that Lopez had repeatedly sexually harassed two Young female employees in June and July. Lopez blocked passage of the Markey Bill (Child Victims Act) meant to make pedophiles accountable for their crimes, working closely with the Catholic Church and Satmar to ensure the bill's failure.
REPORTED BY
FAILED MESSIAH


ALBANY — Assemblyman Vito J. Lopez, the Brooklyn Democratic leader and longtime political power broker there, has been stripped of his committee chairmanship, barred from employing young people, and censured after an Assembly committee determined that he had sexually harassed two female employees this summer.

The censure immediately threatened the career of Mr. Lopez, whose influence and power have been so strong that in 2008, Mayor Michael R. Bloomberg’s aides sought his help persuading the City Council to allow the mayor to run for a third term, and Caroline Kennedy lunched with Mr. Lopez as she tried to win support for an appointment to the United States Senate.Rep. Jerry Nadler: “I applaud the work of both the bi-partisan Assembly Ethics Committee and Speaker Silver for the swift and judicious action in removing Assemblyman Vito Lopez from the Chairmanship of the Assembly Housing Committee and in taking other punitive steps as a result of the findings that Assemblyman Lopez was guilty of multiple acts of sexual harassment and abuse. In light of the reprehensible conduct revealed by the Ethics Committee, I call upon Assembly Lopez to do the only honorable thing by immediately resigning his positions as a Member of the Assembly and as the County Chair of the Brooklyn Democratic Party.”
But after the censure was announced Friday by Assembly Speaker Sheldon Silver, other politicians began to call for Mr. Lopez to resign, including Christine C. Quinn, the City Council speaker; United States Representative Jerrold NADLER; and the Manhattan borough president, Scott M. Stringer.
Mr. Silver, a Manhattan Democrat, said he had decided to censure Mr. Lopez after the Assembly’s ethics committee said it had ruled unanimously that allegations Mr. Lopez had verbally and physically harassed the employees were credible.
“There were multiple incidents of unwelcome physical conduct toward one complainant, wherein you put your hand on her leg, she removed your hand, and you then put your hand between her upper thighs, putting your hand as far up between her legs as you could go,” Mr. Silver wrote, describing the committee’s findings.
He also said, “There was pervasive unwelcome verbal conduct by you toward both complainants from early June 2012 until the time they made complaints of sexual harassment in mid-July 2012, including repeated comments about their physical appearance, their bodies, their attire, and their private relationships.”
He said that Mr. Lopez “required” one of the women to travel with him to Atlantic City last month, where he attempted to kiss her, and that “she struggled to fend you off before you stopped, and that on the drive back from Atlantic City you again put your hand between her legs.”
The Assembly has faced a string of sexual harassment allegations in recent years, and Mr. Silver is particularly sensitive to the issue because he once faced accusations that he did not respond aggressively to rape allegations against a former top Assembly aide, J. Michael Boxley, who pleaded guilty in 2003 to sexual misconduct. Two years earlier, an Assembly employee had brought a complaint of sexual assault against Mr. Boxley to the Assembly leadership, but the investigation had been closed without action.
Since that time, the Assembly has confronted other problems. In 2006, Assemblyman Ryan Karben, a Democrat, resigned amid allegations that he watched pornography with three interns. In 2007, Assemblyman Mike Cole, a Republican also from western New York, was removed from his post as ranking member of the Assembly Committee on Alcoholism and Drug Abuse after revelations that he had slept at the home of a 21-year-old female intern after a night of heavy drinking. And in 2008, Assemblyman Sam Hoyt, a Buffalo Democrat who now works for Gov. Andrew M. Cuomo, had an affair with a former intern.
Mr. Lopez, first elected in 1984, represents parts of East Williamsburg and Bushwick. He won his last race, in 2010, by a nine-to-one margin.
His chairmanship of the housing committee in the Assembly gave him significant sway over matters of real estate and housing policy in New York City. Mr. Lopez has also been the head of the Brooklyn Democratic Party since 2005 and has been known as one of the more irascible players in city politics. Earlier this year, his political machine took part in an unsuccessful effort to oust Nydia Velazquez, a fellow Democrat and a 10-term congresswoman, in a primary, and Mr. Lopez was openly hostile to her in his public comments.
Long considered Brooklyn’s patronage king, he is the founder of the Ridgewood Bushwick Senior Citizens Council, a nonprofit organization that has fueled his political machine for decades. City and federal authorities have in the past scrutinized his relationship to nonprofit groups, in particular the Ridgewood Bushwick organization, but he has not been charged in connection with the inquiries.
Mr. Silver said he had imposed multiple sanctions on Mr. Lopez, following the recommendations of the committee.
“Please be advised that you are hereby removed as Chair of the Committee on Housing, that any rights or privileges of seniority you currently retain are deemed forfeited, and that your staff allocation will be reduced in a manner consistent with the Committee’s recommendation,” Mr. Silver wrote.
“In addition, you are hereby directed that you are not to have any interns placed or working in your offices, or any employees under the age of 21 in your offices. Supplemental sexual harassment training will be scheduled for you and your staff.
“Finally, based upon the foregoing and upon the unanimous recommendation of the Committee on Ethics and Guidance, I hereby censure and admonish you on behalf of the New York State Assembly and its Members and declare that your conduct with respect to this matter violates the Assembly’s Sexual Harassment/Retaliation Policy and is inconsistent with the standards of conduct to which Members of the Assembly should be held.”
Mr. Lopez’s office had no immediate comment on Friday.

Posted by voiceofjustice613 at 2:01 PM No comments: