Dear Senator Schumer,
Every once in a while, there comes a time when a person’s entire life, his entire destiny becomes crystal clear 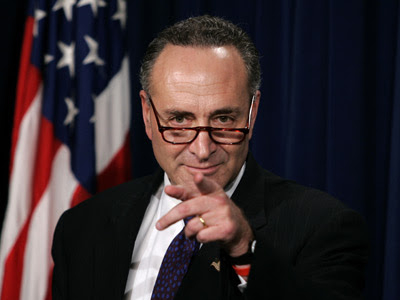 This was the case Winston Churchill his destiny becomes crystal clear Hashem had placed him as the man to rally his nation to fight against Hitler. Hashem had ensconced him as leader of
Great Britain in order to rally the free world against this raving madman.
Sir Winston Churchill had the choice as to whether to meekly oppose the forces of tyranny and evil or to rally against it with all that he had.
My dear Senator, you too have this choice.

During these three weeks since this Iran deal has been announced you have carefully studied it and you have concluded that you will individually oppose it. You can do this, and thus passively allow the president to veto Congress’s rejection.
Or you can choose to fulfill your obvious destiny, a destiny you say that your own mother had foretold.
At this past Agudah dinner held in May, that you had attended and addressed, you and the Novaminsker Rebbe shared the same message. In the two hundred dinners that I have attended, never in my life have I heard the same message from both a Gadol haDor and a politician.
Senator Schumer, you say your name is Schumer because you are the “Shomer Yisroel.”
- s Schumer because you are the “Shomer Yisroel.”

Your task, your life mission is clear. It is not the politics that politicians play, but it has got to be real and genuine.
You must rally and lead. You must call every single democratic senator to override the president’s future veto. You must work the phones, day and night. You must not rest until you have lobbied, convinced, and cajoled every democratic senator on your speed dial.
Blast them with emails. Text them. Call them. Use every means at your disposal for this is your true mission.
Don’t have the staff? We will help you. Every single one of your Jewish constituents and our readership will volunteer in this task.
Donald Trump is in the headlines every day saying some message. Where are you Where is the Shomer Yisroel that you spoke about at the Agudah Dinner?
If your name truly comes from “Shomer – Guardian” then I direct you to a prayer that we recite daily. The prayer has been modified, but if there is any sincerity in what
stand for, you must follow it.
Schumer, Schumer, Yisroel, Shmor sheris yisroel. V’al yovad, v’al yovad yisroel, haOmrim Shma Yisroel.
Schumer, Schumer, guard the remnant of Israel. And let them not be destroyed, Let Israel not be destroyed – those who recite the Hear O’ Israel.
This deal, by the standards that you yourself have proclaimed at that May Agudah dinner, is a tragc failure.
You spoke about inspections, “any where and any time.. unannounced. You said it should be even at new and previously unknown places..
Where is your voice? Your voice, once so eloquent and so proud?
-
Posted by voiceofjustice613 at 1:04 AM